These are all of the chapters of the book of 2 Kings. Clicking on a chapter will show you the text of that chapter of 2 Kings in the Bible (New International Version). 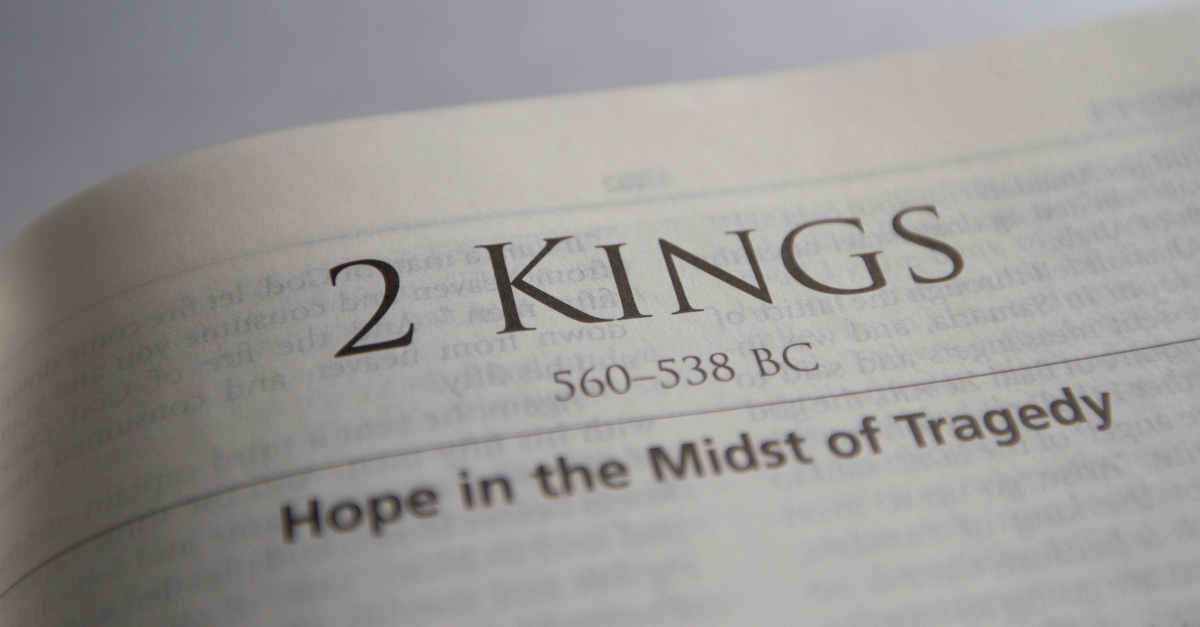 This book, along with 1 Kings was originally a single volume in the Hebrew canon. But who wrote Kings and when they wrote it are not known with any certainty. According to Adam Clark, some people have proposed that either Isaiah or Jeremiah authored Kings, based on the similarity of some of their known writings. Kenneth Barker and John Kohlenberger, for example, favor Jeremiah as the author of Kings, But Clark seems to favor Ezra as the author of this history.

Some scholars advocate for two or more authors for Kings with a final editor, but Paul House believes that a single author is most likely. This single author also likely wrote Joshua, Judges and Samuel. However, there is no way to know for certain who wrote it.

Kings closes with a reference to Jehoiachin being released from prison in the 37th year of his exile (2 Kings. 25:27-29). This would indicate that Kings did not reach its final form until at least 25 years after the fall of Jerusalem.

Context and Background of 2 Kings

In our English Bibles we group Joshua, Judges, Samuel, and Kings, along with a few others, into a section we call historical. And they do contain history. But in the Hebrew Bible these four books are identified as the Former Prophets.

The book of Deuteronomy, especially chapters 27 and 28, is important to the author of Kings. Deuteronomy defines the law of God and chapters 27 and 28 include the blessings that come from following the law and the curses that come from disobedience. Each of the kings in the book are judged, not by their military or economic prowess, but by how obedient they were to God’s law.

Second Kings opens with the end of Elijah’s ministry followed by a long description of the ministry of Elisha to the peoples of the northern kingdom of Israel. It then briefly describes the reigns of the later kings of the divided monarchy, including the fall and destruction of Israel, the fall and destruction of Jerusalem and the end of the kingdom of Judah. But, as almost a footnote, 2 Kings concludes the release of Jehoiachin from prison, giving a sliver of hope for the future of the Davidic kingship.

Main Theme and Purpose of 2 Kings

According to Barker and Kohlenberger, Kings is more than just a chronicle of events. They say the following:

“The author writes to demonstrate conclusively to his readers the necessity of keeping their covenantal obligations before God and the history of those most responsible for leading God’s people in their stewardship of the divine economy: Israel’s kings and prophets. Hence Kings everywhere bears the twin marks of redemptive history and personal accountability.”

House also identifies a number of theological ideas that are incorporated into Kings by its author. His identification of each of these is presented as a contrast between the ideal and its opposite. These include 1) monotheism verses idolatry; 2) central worship verses the high places; 3) covenant loyalty verses spiritual rebellion; 4) true prophecy verses “lying spirits”; 5) God’s covenant with David verses dynastic disintegration; and 6) God’s sovereignty verses human pride.

What Can We Learn from 2 Kings for Today?

The ministry of Elisha is a vivid reminder that God can take care of our physical needs. As you read the early chapters of 2 Kings you see over and over that God uses Elisha to miraculously care for people. From restoring a son to life, to finding a lost axe head, God is concerned about his people. That is no guarantee that he will find your lost keys for you, but it is comforting that he knows and cares about his people.

2 Kings gives a brief synopsis of the kings who ruled for the last years of Israel and Judah. And each of these kings is graded, not on their military or economic power, but on their obedience to God. Most of them failed miserably. But each of these kings dramatically impacted the spiritual life of the nation they ruled. The people followed along in whatever spiritual direction their king took. This should be a reminder to us today of the importance of electing leaders with good character and devotion to God.

But it is not just the important people in our world who can make a difference. In the story of Naaman, the Aramean general with leprosy (2 Kings 5), it is easy to focus on Naaman and Elisha. But that encounter might never have happened except for the actions of a young slave girl. It was her actions that led Naaman to go to Elisha and experience healing. We should never underestimate our ability to make a difference in the world around us. Even when we may seem pretty insignificant.

2 Kings 5:2-3: “Now bands of raiders from Aram had gone out and had taken captive a young girl from Israel, and she served Naaman’s wife. She said to her mistress, ‘If only my master would see the prophet who is in Samaria! He would cure him of his leprosy.’” Even the most insignificant people can make a difference.

2 Kings 6:16: “’Don’t be afraid,’ the prophet answered. ‘Those who are with us are more than those who are with them.’” Elisha’s words to his servant before his eyes were opened to see the army of God around them.

2 Kings 10:28: “So Jehu destroyed Baal worship in Israel.” This verse summarizes Jehu’s actions in destroying the prophets of Baal. And because of his faithfulness in doing this, God promised he would have the throne of Israel to the fourth generation.

2 Kings 12:2: “Joash did what was right in the eyes of the Lord all the years Jehoiada the priest instructed him.” This verse, and Joash’s life, illustrate the importance of godly advisors.

2 Kings 18:5-7a: “Hezekiah trusted in the Lord, the God of Israel. There was no one like him among all the kings of Judah, either before him or after him. He held fast to the Lord and did not stop following him; he kept the commands the Lord had given Moses. And the Lord was with him; he was successful in whatever he undertook.”