These are all of the chapters of the book of 2 Chronicles. Clicking on a chapter will show you the text of that chapter of 2 Chronicles in the Bible (New International Version). 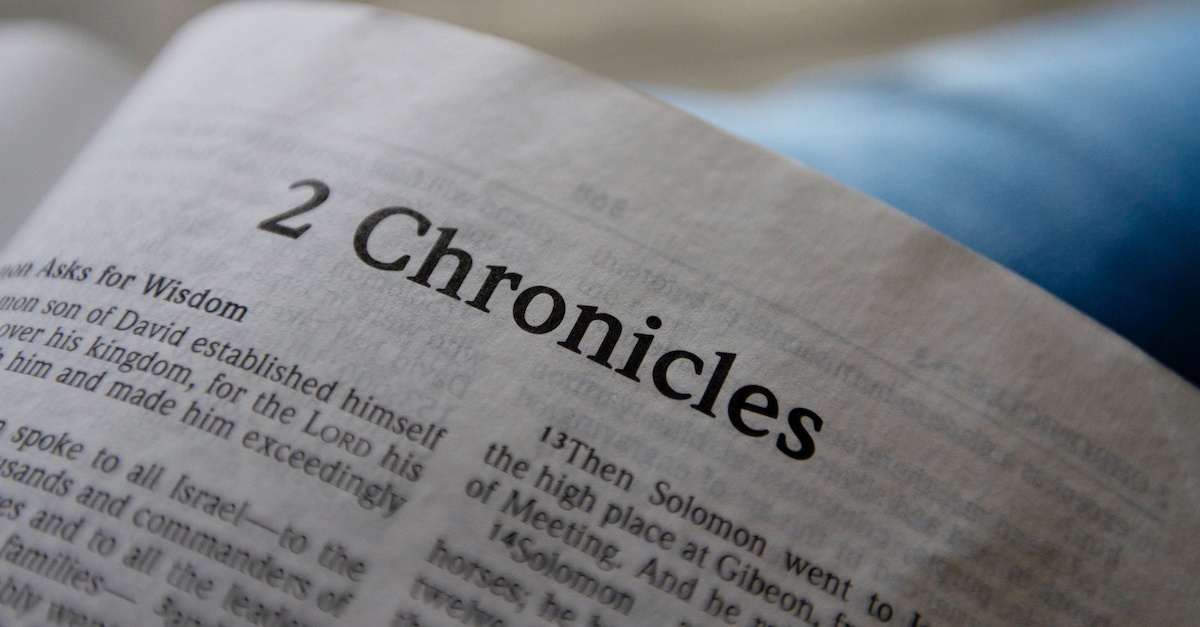 Who Wrote the Book of 2 Chronicles?

“The Chronicler,” as scholars have long referred to the author of this book, is anonymous. Jewish tradition speculates that Ezra could have written 1 and 2 Chronicles, which—like Samuel and Kings—originally formed one work. But nothing within the text provides a definitive clue as to the compiler of the material. Second Chronicles was originally joined with 1 Chronicles as one book but has been separated into two books since about 200 BC when the Septuagint, the Greek version of the Old Testament, was translated.

Context and Background of 2 Chronicles

The Book of 2 Chronicles, like 1 Chronicles, gives an accounting of events in the history of God’s people and how God’s plan for redemption has been revealed through these events.

In the original Jewish order of the Bible, the Book of Chronicles (including 1 and 2 Chronicles) is the last book of the Old Testament because it summarizes the entire story of God’s work through humanity up until that point in history: The first word of 1 Chronicles is ‘Adam’ and the last chapter of 2 Chronicles leads us to the return from exile (36:22-23).

2 Chronicles covers the time period from Solomon’s rise to the throne and completion of the temple, to the proclamation of Cyrus to rebuild the temple 400 years later. The book virtually ignores the northern kingdom of Israel because of its false worship and refusal to acknowledge the temple in Jerusalem.

Main Theme and Purpose of 2 Chronicles

A Prayer for Wisdom

Solomon is famously referred to as the wisest man who ever lived. Whether this is true, there is no doubt that he possessed a great amount of wisdom. At the start of his reign, the Lord promises to give him whatever he asks, and Solomon (wisely) asks for wisdom. This defines him to this day.

First and 2 Chronicles give an account of the history of a nation, but more than that, they tell the story of a family. The genealogies of 1 Chronicles are truly a family tree: a family that began with Adam, led to King David, through Solomon, through successive good and bad kings, and as we know eventually leads to Christ. It reveals that God’s covenants and promises are true through all generations. We are to prepare for the future, looking to the restoration of all things in Christ.

2 Chronicles truly leaves the story unfinished, in that the last verse of 2 Chronicles is not a complete sentence. Interestingly enough, the sentence is finished at the beginning of Ezra, as Ezra 1:1-3 mirrors 1 Chronicles 36:22-23.

The first half of 2 Chronicles gives an account of the reign of Solomon (1-9), and the second half gives an account of the following kings of Judah (10-36). From verses 10 forward, we witness 393 years of disaster. In spite of God’s hand in the establishment of David’s throne, things do not last. After Solomon’s death, the nation divides and both Israel and Judah begin to crumble.

What Can We Learn from 2 Chronicles Today?

A Reason to Hope

These words were written to give the people of Israel the story of their past in order to give them hope for their future. The books of 1 and 2 Kings provide accounts of many kings of both Israel in the north and Judah in the south, but 1 and 2 Chronicles focuses us specifically on the kingdom of Judah and the reign of David. This provides us a distinct view of what the Jewish people could expect in anticipation of their Messiah and provides us a background of how God has been working out his redemptive plan all the way from Adam.

Even When We Don’t See it, God Is at Work

The people who had returned from exile had hoped that when they returned, the new temple would be built in glorious splendor and the Messiah would appear to reign and restore all things. Yet, that is not what has happened. First and 2 Chronicles give hope to us as it did to them and gives reason to keep hoping. This historical account reveals that God has been at work, is still at work, and will continue working among us. The temple is gone but the need to worship is not. We may not see his finished plan in a generation or even many generations, but his plan is indeed unfolding among us.

From chapter 10 forward we witness a procession of kings. We can observe that when a king serves God, the nation prospers, and when the king is wicked, the nation declines. The concept of Godly rulers bringing prosperity and peace to the nation is abundantly evident. This encourages us to set an example of godly leadership and to pray fervently for those who lead us. We see a promise from God that if we pray, God will heal our land. This is a promise to the Jewish people, but it makes sense that God will bring healing to us through prayer as well.

In reading 1 and 2 Chronicles, we see that God has been active and moving among his people, preparing the way for a Messiah who would be both Priest and a King.

Our Favorite Verses from 2 Chronicles

2 Chronicles 1:10-12 - "'Give me wisdom and knowledge, that I may lead this people, for who is able to govern this great people of yours?” God said to Solomon, 'Since this is your heart’s desire and you have not asked for wealth, possessions or honor, nor for the death of your enemies, and since you have not asked for a long life but for wisdom and knowledge to govern my people over whom I have made you king, therefore wisdom and knowledge will be given you. And I will also give you wealth, possessions and honor, such as no king who was before you ever had and none after you will have.'”

2 Chronicles 7:14 - "If my people, who are called by my name, will humble themselves and pray and seek my face and turn from their wicked ways, then I will hear from heaven, and I will forgive their sin and will heal their land."

2 Chronicles 6:14 - He said: “Lord, the God of Israel, there is no God like you in heaven or on earth—you who keep your covenant of love with your servants who continue wholeheartedly in your way.”