These are all of the chapters of the book of Ecclesiastes. Clicking on a chapter will show you the text of that chapter of Ecclesiastes in the Bible (New International Version). 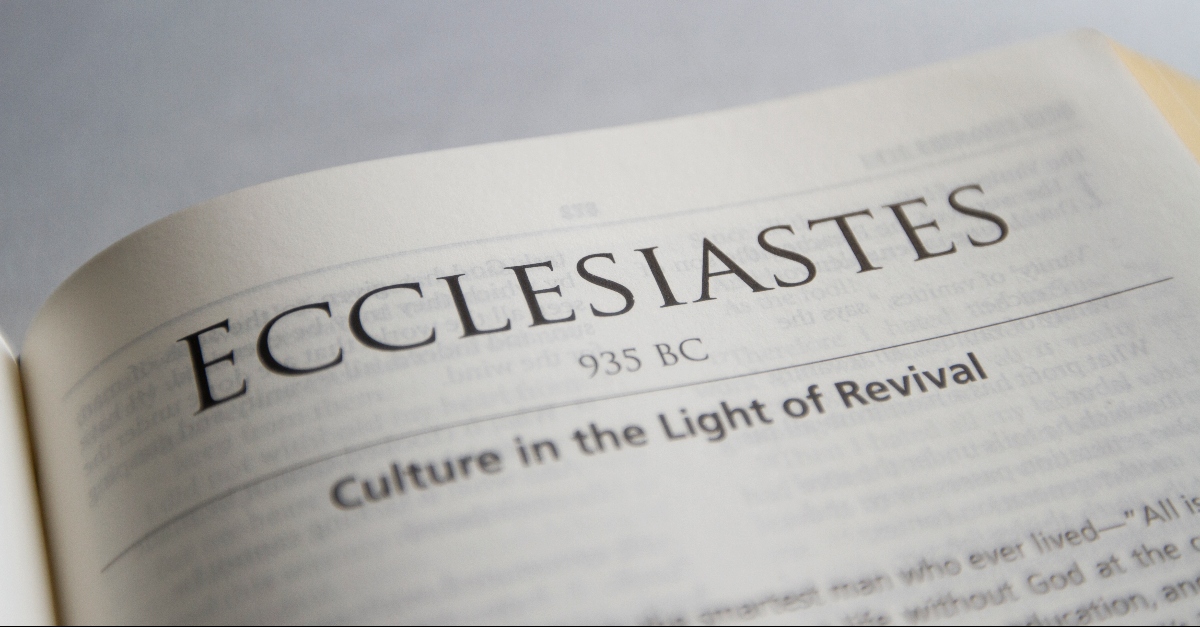 Who Wrote the Book of Ecclesiastes?

The author of Ecclesiastes is not clear, though several verses indicate it was written by King Solomon, son of King David, third king of Israel, and builder of God’s First Temple in Jerusalem. However, many scholars believe Solomon did not write the book, both because the linguistic and literary devices used are typical of a later time period and because of allusions to historic events that came after Solomon’s time. Scholars often call it “fictional autobiography,” where the author assumes the identity of King Solomon and writes as though the author is, indeed, Solomon.

Context and Background of Ecclesiastes

Anyone who’s ever questioned the point of life or found themselves in a situation so dull, difficult, or frustrating they uttered, “This, too, is meaningless!” might find a kindred spirit in the writer of Ecclesiastes. Well known for that often-repeated verse, this 12-chapter book in the Bible’s Old Testament is devoted to exploring the meaning of life and why both good and evil befall the innocent and the wicked alike.

If the book was written by Solomon it likely would have been penned in the later years of his life, around 940 B.C. More likely, it was written by sages much later, given its historical and linguistic nature, as early as 3 or 5 B.C. and possibly later. The intended audience was the people of Israel from the standpoint of a wise, respected, and much-beloved teacher.

Main Theme and Purpose of Ecclesiastes

Ecclesiastes is foremost a study of philosophy for the faithful—about the purpose of life, what it means to be wise versus foolish, why terrible things often happen to the best of people, how to achieve self-fulfillment, and whether it is permissible for God’s people to enjoy the simple pleasures in life.

The text starts out with a burst of gloom, rife with zingers such as, “‘Meaningless! Meaningless!’ says the Teacher. ‘Utterly meaningless! Everything is meaningless.’ What do people gain from all their labors at which they toil under the sun?” (Ecclesiastes 1:2-3 NIV), or “No one remembers the former generations, and even those yet to come will not be remembered by those who follow them” (1:11), concluding Chapter One with, “I have seen all the things that are done under the sun; all of them are meaningless, a chasing after the wind” (1:14).

Then it continues, in a meandering style, to point out what else is meaningless, everything from wisdom, folly, toil, and pleasure to riches, advancement, and ambition. Indeed, the author notes in 9:2, “All share a common destiny—the righteous and the wicked, the good and the bad, the clean and the unclean, those who offer sacrifices and those who do not. As it is with the good, so with the sinful; as it is with those who take oaths, so with those who are afraid to take them.”

In the end, the only point to anything is God: giving Him glory and honor, obeying His commands, and accepting that His way is supreme and humans are limited creatures with finite power, capacity, and capability. Therefore, we can feel free to enjoy life’s good times, understand hardship happens to us all, and know that there is no meaning to be found in life apart from the Lord, who reigns supreme overall. It ends with instruction to “Fear God and keep his commandments” (12:13).

What Can We Learn from Ecclesiastes Today?

Today, many people find themselves caught up in the rush of busyness and the onslaught of an endless to-do list. Many find themselves working hard, only to get to the point where they have achieved their long-awaited dreams and still find themselves deeply unhappy. All that chasing—after love, material goods, wealth, security, or fame—is for naught, and they find themselves depressed and desperate for answers. Others have been able to focus on the good and simple pleasures of life, including time in creation and cherished moments with loved ones, only to experience extreme grief, loss, illness, poverty, or other hardship.

Ecclesiastes reminds us that all things good and bad fall under the domain of our Heavenly Father, that we might not understand any of the reasons in our limited human perspective, but we can rest sure in the knowledge that God has a plan. He sees all and knows all, and He is with us through it all. And best of all, there is a time for all—glorious and painful, wonderful and terrible—all part of His plan. As the author writes, “He has made everything beautiful in its time. He has also set eternity in the human heart, yet no one can fathom what God has done from beginning to end” (3:11).

Other Favorite Verses from Ecclesiastes

“Two are better than one, because they have a good return for their labor: If either of them falls down, one can help the other up. But pity anyone who falls and has no one to help them up.”— Ecclesiastes 4:9-10

“Everyone’s toil is for their mouth, yet their appetite is never satisfied.”—Ecclesiastes 6:7

“Do not say, ‘Why were the old days better than these?’ For it is not wise to ask such questions.”—Ecclesiastes 7:10

“For the living know that they will die, but the dead know nothing; they have no further reward, and even their name is forgotten.”—Ecclesiastes 9:5

“Whatever your hand finds to do, do it with all your might, for in the realm of the dead, where you are going, there is neither working nor planning nor knowledge nor wisdom.”— Ecclesiastes 9:10

Encyclopedia of The Bible, Bible Gateway Plus