These are all of the chapters of the book of Ezekiel. Clicking on a chapter will show you the text of that chapter of Ezekiel in the Bible (New International Version). 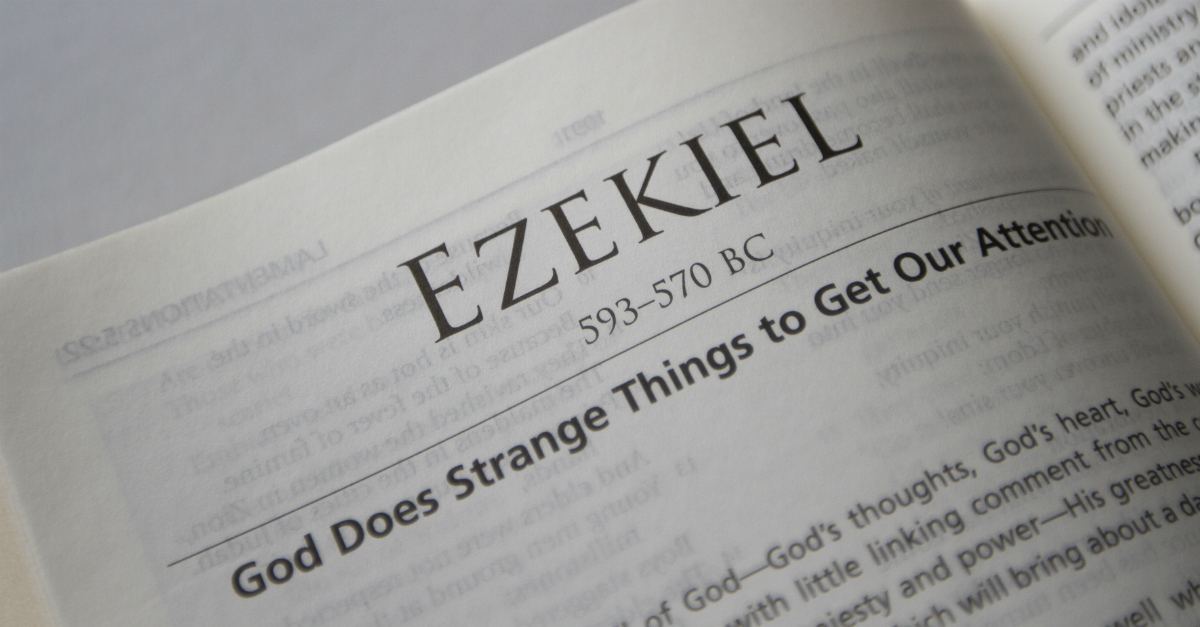 Who Wrote the Book of Ezekiel?

Ezekiel, a priest-turned-prophet, during the time of the Babylonian takeover and captivity of the land of Judah, wrote this 48-chapter book during the sixth century BC. He was a contemporary of other major prophets such as Daniel and Jeremiah, and minor prophets such as Habakkuk and Obadiah. Like Daniel, he was also taken into captivity in Babylon (Ezekiel 3:12-21).

Context and Background of Ezekiel

The Book of Ezekiel was written during a tumultuous time in Judah. The Babylonians, during the time the book was being written, captured Judah’s inhabitants in three waves, scattered the rest, or left behind the poorest of the poor (Jeremiah 52:15).

Written roughly between 593 BC to 573 BC (the waves of deportation happening in 605, 597, and 586), Ezekiel would’ve been writing in the midst and aftermath of the Babylonian invasion. He himself would’ve been taken to Babylon in the second wave, 597 BC.

But he rebelled against Babylon and placed his faith in other nations who failed him. Enraged by this severing of their relationship, Nebuchadnezzar laid siege to Jerusalem.

Main Theme and Purpose of Ezekiel

Ezekiel received a word from the Lord to give to Jerusalem, and he carried out a number of symbolic acts to symbolize how far Judah had fallen from the Lord. The majority of the book shows the repercussions of Israel’s rebellion against God. As a result, God gave Israel over to their enemies for a short period of time, 70 years.

Some of these acts include:

The main theme of the book appears to be threefold. First, God has let Israel reap the rewards of their sin through their captivity in Babylon (Ezekiel 23). Second, God will punish the nations who have wreaked havoc on Israel through their history. Third, God will restore the Israelites and return them home, giving them a hope that this captivity in Babylon will not last forever.

What Can We Learn from Ezekiel Today?

First, our sins have consequences. What may seem like an innocuous action can actually tear apart entire nations.

Second, God takes his people very seriously. Any nation that conspires against his people will receive his vengeance in full, as seen in the nations who wreaked havoc on Israel.

Third, God will restore us back home. Although we are wanderers in a strange land for a short time, a new Jerusalem and earth is coming, just like it had for the Israelites when they returned from captivity.

Fourth, our sin is our own. A particularly poignant verse in Ezekiel 18:20 shows that God measures our sins by what we personally do, not what our parents or those close to us have done. Even if we have a tattered legacy, we can still turn to God and start a new narrative in our own lives. And even if our parents are saved, that doesn’t guarantee our own salvation.

Ezekiel 1:28, “Like the appearance of a rainbow in the clouds on a rainy day, so was the radiance around him. This was the appearance of the likeness of the glory of the Lord. When I saw it, I fell facedown, and I heard the voice of one speaking.”

Ezekiel 14:11, “Then the people of Israel will no longer stray from me, nor will they defile themselves anymore with all their sins. They will be my people, and I will be their God, declares the Sovereign Lord.”

Ezekiel 33:11, “Say to them, ‘As I live!' declares the Lord GOD,’ I take no pleasure in the death of the wicked, but rather that the wicked turn from his way and live. Turn back, turn back from your evil ways! Why then will you die, O house of Israel?'”

Ezekiel 36:26, “Moreover, I will give you a new heart and put a new spirit within you; and I will remove the heart of stone from your flesh and give you a heart of flesh.”

Ezekiel 37:11-12, “Then he said to me: ‘Son of man, these bones are the people of Israel. They say, ‘Our bones are dried up and our hope is gone; we are cut off.’ Therefore prophesy and say to them: ‘This is what the Sovereign Lord says: My people, I am going to open your graves and bring you up from them; I will bring you back to the land of Israel.’”

Biblehistory.com, Timeline of the Babylonian Captivity.