These are all of the chapters of the book of Amos. Clicking on a chapter will show you the text of that chapter of Amos in the Bible (New International Version). 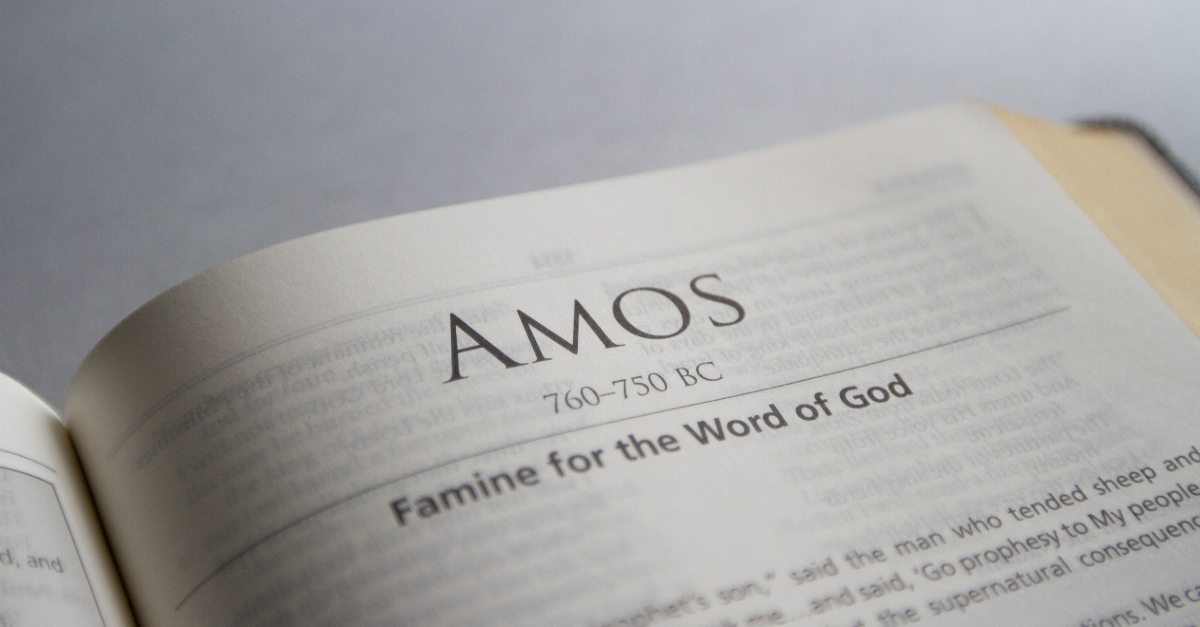 Who Wrote the Book of Amos?

Based upon Amos 1:1, scholars have surmised that a man named Amos, who lived during the time when Israel was divided into two kingdoms, was the author. A shepherd and grower of sycamore figs, he resided in the town of Tekoa. This town was located just 10 miles south of Jerusalem and was a part of the Judean kingdom. Amos did come from a family of prophets but was not a prophet himself. From his writings, we can speculate that he was most likely an educated man who was also in tune with the oppression of his people.

Context and Background of Amos

It is believed that Amos wrote this book in the timeframe of 760-750 B.C. Scholars use his written word to verify this. Verse 1:1 states “The words of Amos, one of the shepherds of Tekoa – the vision he saw concerning Israel two years before the earthquake, when Uzziah was king of Judah and Jeroboam son of Jehoash was king of Israel.” There are recorded writings of the mentioned earthquake that happened about 760 B.C. There are also no mentions of any struggles that happened after the reign of Jeroboam, enabling scholars to pin down the date successfully.

During this time, Israel is prospering. After years of turmoil, the Israelites are enjoying good political standing and their relationship with the Phoenicians is proving successful. Along with wealth and luxury, the Israelites are turning their ways to the gods of the Canaanites.  Moral standards are forgotten, and the commandments are being ignored.

Amos is telling the people of Israel what is going to take place if they do not change their ways. This is not welcomed as he is not a resident of their kingdom. He is an outsider to them and they do not believe he should be telling them what they need to do. It should be noted that the prophet Hosea is living and prophesying at the same time as Amos.

Main Theme and Purpose of Amos

The dominant theme of Amos is summed up in Amos 5:24, “But let justice flow like water, and righteousness, like an unfailing stream.” He wanted to awaken Israel to the error of their ways. They had to learn that their nation would be responsible and accountable for the sins they have committed against God.

There are two primary sins Israel had committed. The first was their absence of true worship. In chapter 4, God points out the social and spiritual corruption of Israel. God pleads with Israel when he says, “Seek me and live” (Amos 5:4). Amos is impressing upon the people of Israel that the day of the Lord is coming. He warns them to turn away from their sin and give God the worship He deserves.

The second primary sin was a lack of justice within Israel. Amos 5:10-13 tells us that Israel has begun hating the one that convicts the guilty and despises the one that speaks integrity. He reminds them that He knows what they have done and that there will be a punishment. Amos 6:12 says “… Yet you have turned justice into poison and the fruit of righteousness into wormwood.”

Amos had been chosen by God to share His message of imminent destruction. This was a warning. Israel needed a reminder that even though they were God’s chosen people, they were not immune to consequences.

What Can We Learn from Amos Today?

The message of Amos is just as important today as it was when it was spoken to Israel. Amos is delivering a global message that we all could stand to hear. That message is that none of the nations on Earth will escape the judgment of God. They are all responsible for how they act toward their fellow man – materialism and social injustice will not be pardoned sins.

Our world today can be described as materialistic. In a society that always wants the latest thing, we must be careful to not put our material wealth before God. What we do with the wealth and material God blesses us with is Amos’ main concern. Personally, we are to extend our wealth as God does. We are to embody the character, compassion, and generosity of Christ. Everything we have comes from the Lord and it should be used to give glory to God.

Globally, this is true as well. We must reach a hand of mercy to those less fortunate. Social injustices are happening all over the world. Our fellow man is experiencing a lack of drinking water, food to eat, and inadequate health care. God wants us to extend our wealth to these people. Christians should never believe that because they have God’s favor, they do not have to help. He will judge us and apply punishment when we need it.

Favorite Verses from the Book of Amos

Amos 3:3: “Do two walk together unless they have agreed to do so?”

Amos 3:7: “Surely the Sovereign LORD does nothing without revealing his plan to his servants the prophets.”

Amos 4:1: “Hear this word, you cows of Bashan on Mount Samaria, you women who oppress the poor and crush the needy and say to your husbands, ‘Bring us some drinks!’"

Amos 5:12: “For I know how many are your offenses and how great your sins. There are those who oppress the innocent and take bribes and deprive the poor of justice in the courts.”

Amos 9:15: “’I will plant Israel in their own land, never again to be uprooted from the land I have given them,’ says the LORD your God."

Ashley Hooker is a freelance writer who spends her time homeschooling her two children, ministering alongside her husband as he pastors a rural church in West Virginia, and writing about her faith. Currently, she is a contributing author for Journey Christian magazine. She has taken part in mission trips with the NC Baptist Men during the devastation of Hurricanes Katrina and Harvey in Mississippi and Texas. In her local church, she has served on various committees focusing in the area of evangelism along with traveling to West Virginia and Vermont to share the Gospel. Her dream is to spend her time writing and sharing the love of Christ with all she meets.