These are all of the chapters of the book of Obadiah. Clicking on a chapter will show you the text of that chapter of Obadiah in the Bible (New International Version). 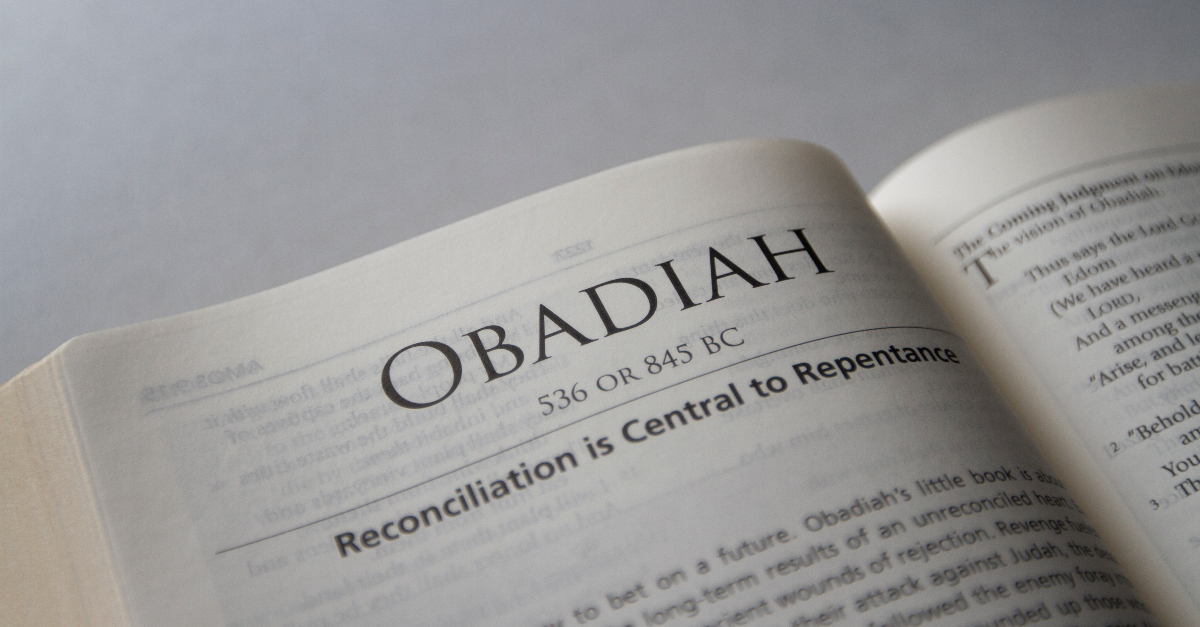 Who Wrote the Book of Obadiah?

Not much is known about the specific prophet Obadiah who received a vision to write this short 21-verse book. Although one prophet named Obadiah was an official during King Ahab’s reign (1 Kings 18:3-16), this Obadiah was not the same. In fact, 12 men by the name of Obadiah, “one who serves Yahweh,” appear in Scripture.

The minor prophet who penned this book likely did so after the destruction of Jerusalem by the Babylonians in 586 BC. He spares no words on background details about himself or his family, and dives right into the meat, the impending destruction of Edom.

Context and Background of Obadiah

As far as dates go, scholars’ opinions vary. Some have put this book in 840 BC, long before the destruction of Jerusalem (or the fall of the Northern Kingdom to Assyria in 722 BC). They have argued for this because the Edomites rebelled against Jerusalem in that time period (2 Chronicles 21:16–17).

Others have placed the date of the book as far as 400 BC, long after the Babylonians took over, and the Israelites returned to their land. However, this late date doesn’t make as much sense because Edom fell in 553 BC.

Most likely, Obadiah had to have written the book sometime between 586 BC and 553 BC to account for this being a vision, but also to take into consideration the brutal humiliation Israel just encountered through being taken into captivity by Babylon (Daniel 1).

No matter when the book takes place, there appears to be one main recipient of the book: the Edomites

Now, the Edomites descended from the line of Esau (Genesis 25:3). Isaac, the son of the patriarch Abraham, had two sons: Esau and Jacob. As the eldest, Esau had the birthright to his father’s inheritance and blessing, but Jacob usurped them through trickery. Jacob became one of the fathers of the Israelite nation, and Esau, the father of the Edomites.

Throughout their history, the Edomites held a grudge against the Israelite nation. This compounded when King David subjugated them under his rule.

Eventually, they revolted, and from the contextual clues in Obadiah, appear to not only take possession of Jerusalem when it falls to the Babylonians, but they failed to give the Israelites military support when they needed it (Obadiah 1:11), gloated over their demise (Obadiah 1:12), and betrayed them to their enemies (Obadiah 1:7).

Because of this, the same will come upon them. Their pride will bring them low, their enemies will betray them, and others will pillage their land.

Main Theme and Purpose of Obadiah

The main purpose appears to be twofold:

First, God’s people will return home and live on in God’s kingdom. Although they lived in captivity for a while, God brought them back to Jerusalem, and they rebuilt. This is contrasted with the people of Edom, who ended up cut off and decimated forever. God does not forget his people, even when other nations scorn and pillage them. He brings them back home and brings dry bones back to life.

Second, Edom serves as a warning to whoever chooses to let pride overtake their thoughts and actions. Although Edom and Judah stemmed from the same family, Edom chose to let family grudges cloud their judgment. Because of this, they played a passive role during the Babylonian invasion and an even more violent role throughout Israel’s history. Because they didn’t help the problem, they became part of the problem. God doesn’t let sin go without consequences. Edom, among other nations who had caused harm to God’s people, experience horrific destruction, as prophesied in Ezekiel.

In short, the two themes from Obadiah boil down to:

What Can We Learn from Obadiah for Today?

This book may appear intimidating to believers today because of its overall negative tone and themes of destruction, but we can actually glean a lot from the smallest book in the Old Testament.

First, God can restore anything that is broken. The Babylonians utterly decimated Jerusalem, and Judah’s enemies knew it, gloating over their victory. In fact, the Babylonians left behind only the poorest of the poor, and burned the bricks of the temple, to ensure it couldn’t be easily rebuilt. But God can restore what the world tears down. Even in our own lives, we may see ourselves as too far gone. But if God can bring back the Israelites to rebuild their home, he can do the same with us.

Second, messing with God’s people has consequences. Although we may not see justice prevail for certain wrongs in our lifetime, sin does not go unpunished. As seen in the case of Edom, pride suffered a terrible, terrible fall.

Our Favorite Verses from Obadiah

Obadiah 1:11, “This is what the Sovereign Lord says about Edom—We have heard a message from the Lord: An envoy was sent to the nations to say, ‘Rise, let us go against her for battle.’”

Obadiah 1:3, “The pride of your heart has deceived you, you who live in the clefts of the rocks and make your home on the heights, you who say to yourself, ‘Who can bring me down to the ground?’”

Obadiah 1:17, “But on Mount Zion will be deliverance; it will be holy, and Jacob will possess his inheritance.”

Obadiah 1:21, “Deliverers will go up on Mount Zion to govern the mountains of Esau. And the kingdom will be the Lord’s.”