These are all of the chapters of the book of Habakkuk. Clicking on a chapter will show you the text of that chapter of Habakkuk in the Bible (New International Version). 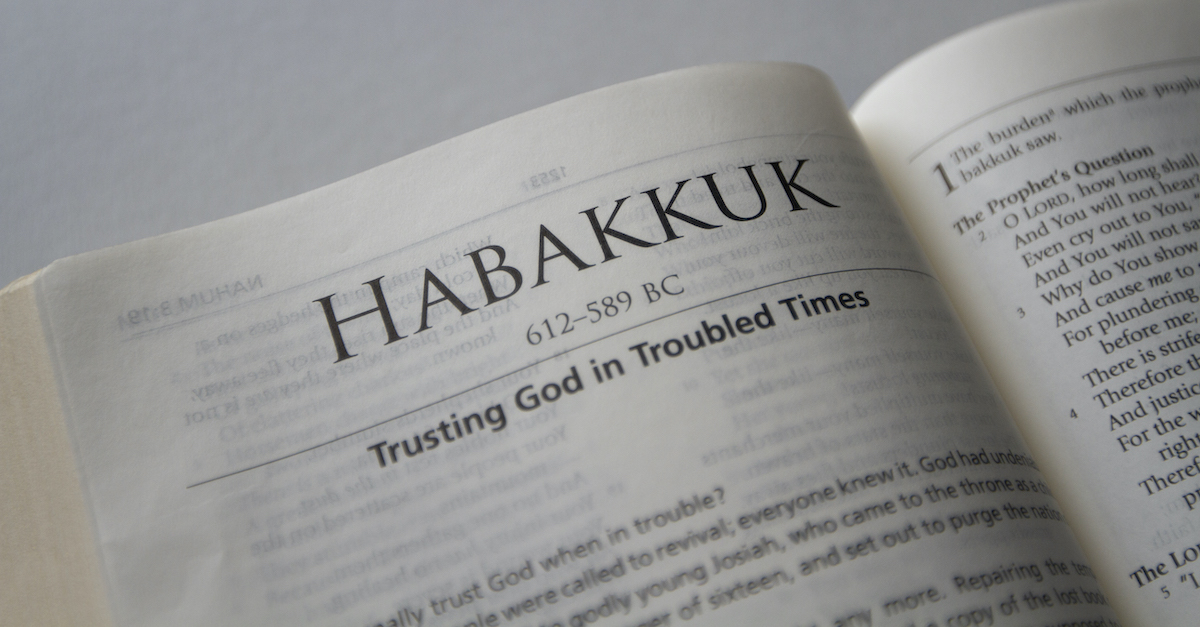 Who Wrote the Book of Habakkuk?

The Book of Habakkuk was written by Habakkuk between 612 and 588 BC. This text would have been written around the same time or the span of time that Daniel was taken into captivity by Babylon in 605 BC. In 597 BC Ezekiel would also be taken captive in Babylon. Biblestudytools.com shares, “Little is known about Habakkuk except that he was a contemporary of Jeremiah and a man of vigorous faith rooted deeply in the religious traditions of Israel.”

Context and Background of Habakkuk

As a prophet of the Lord, Habakkuk was given the honor of relaying messages from God Himself to the people of God. The time in which Habakkuk was a prophet of the Lord was a time of tragedy and destruction for the Jewish people. The style of Habakkuk is in lamented poetry, much like many of the Psalms. This book differed from Habakkuk’s contemporaries as it reflected his struggle to believe that God was good when the world around him only seemed to worsen. A back and forth of complaint and answer reveals to Habakkuk God’s plan of hope and a future. His relationship with God was strengthened and he was given a firmer foothold to stand on the truth and promises of God.

Main Theme and Purpose of Habakkuk

Babylon was becoming a dominating world power and Judah was soon to feel the destructive power of this nation. The book begins with Habakkuk’s struggles and doubts as he does not understand why evil was allowed to persist. Woes of feelings of injustice are poured out from Habakkuk’s heart as he aches to see the people of God overtaken by such evil.

God responds to Habakkuk’s complaints by reminding him of His sovereignty. He explains that Babylon will fulfill a purpose and then they will be punished. God can use things meant for our harm and change them for our good and His purposes. It may not be the plan we prefer, but God is sovereign over all; therefore, we can trust Him in all things.

God responds with great hope to Habakkuk in chapter 2:2, “Write down the revelation and make it plain on tablets so that a herald may run with it. For the revelation awaits an appointed time; it speaks of the end and it will not prove false. Though it linger, wait for it; it will certainly come and will not delay.” A promise of the Lord Himself that though vindication would take time, it would certainly come.

The downfall of Babylon would not only occur by the hand of the Lord but by the hands of their own people. Chapter 2 highlights how injustice, slave labor, irresponsible leaders, and idolatry would cause not only Babylon but future societies guilty of these same sins, to experience their own downfall. King Solomon wisely said there is nothing new under the sun, meaning what has occurred before will occur again. Some of the same practices of Babylon that brought their downfall would be the very things to bring down nations in later generations.

The book concludes with a heartfelt prayer from Habakkuk praising the name of the Lord and standing firmly resolved that the One who promised a son to Abraham and promised freedom from slavery to the Israelites would continue to prove faithful to His people. Living by faith and not by sight and truly holding firm to the truth that God is faithful is the main theme of Habakkuk.

What Can We Learn from Habakkuk Today?

Much can be drawn from the Book of Habakkuk today. Persecution, world hunger, and injustice are all themes of the current age, leading many Christians to seek God’s purpose with heavy but hopeful hearts. We can feel as Habakkuk felt, frustrated and confused, sometimes asking why an all-powerful God would allow such evil to persist. What is evident in this text and what stands today is that God is the same today as He was then and as He will be tomorrow. He sees what we do not see, and we must live by faith, trusting that He will bring justice at the right time.

God already knew the thoughts in Habakkuk’s heart, but Habakkuk only received an answer when he took his questions to God. And God responded with a promise and a reminder of His sovereignty. We must also recognize that the promise remains true for us today. The promise in Habakkuk 2:2 was one of victory to come, and that same victory awaits our world today in His timing. To trust God fully means to trust Him even when we do not understand why events occur as they do.

Our Favorite Verses in Habakkuk

Hab. 1:5, “Look at the nations and watch—and be utterly amazed. For I am going to do something in your days that you would not believe, even if you were told.”

Hab. 2:4, “See, the enemy is puffed up; his desires are not upright—but the righteous person will live by his faithfulness—"

Hab 3:17-18, “Though the fig tree does not bud and there are no grapes on the vines,
though the olive crop fails and the fields produce no food, though there are no sheep in the pen and no cattle in the stalls, yet I will rejoice in the Lord, will be joyful in God my Savior.”

Hab. 3:19, “The Sovereign Lord is my strength; he makes my feet like the feet of a deer, he enables me to tread on the heights.”

Cally Logan is an author and US History teacher from Richmond, Virginia. In her free time, she enjoys mentoring youth and spending time in nature. Her book, Hang on in There, Girl! Will be available everywhere on April 1, 2022. Check her out on Instagram and Twitter, @CallyLogan and TikTok Cally_Logan.