These are all of the chapters of the book of Haggai. Clicking on a chapter will show you the text of that chapter of Haggai in the Bible (New International Version). 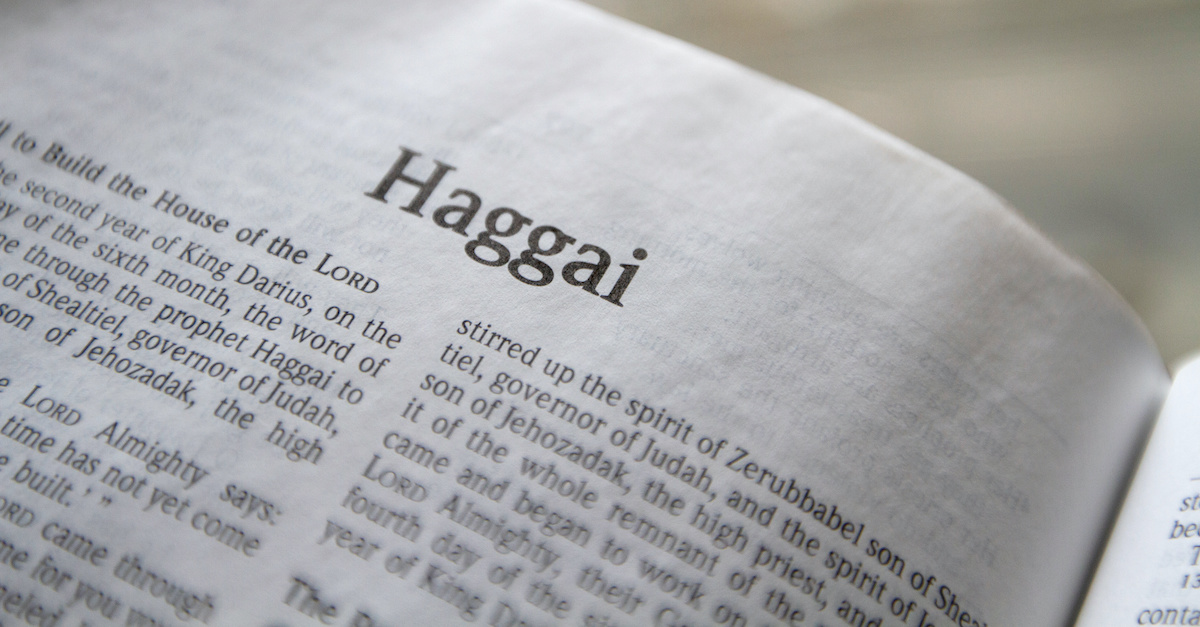 Who Wrote the Book of Haggai?

Haggai was a prophet to those who had returned from exile in Babylon, and his important work is documented in Ezra 6:14, “So the elders of the Jews continued to build and prosper under the preaching of Haggai the prophet and Zechariah, a descendant of Iddo. They finished building the temple according to the command of the God of Israel and the decrees of Cyrus, Darius and Artaxerxes, kings of Persia.”

Context and Background of Haggai

Only two chapters long, Haggai is a small but meaningful book of Scripture. His prophecy takes place during the return from exile as the people were free to rebuild. In 587 B.C., Israel was taken into exile by the Babylonians, but God promised that a remnant would return. Fast-forward to the time of Haggai, and we see that much has changed: Babylon is now an empire in ruins, and the Persians are in control. Under Persian rule, the Israelites are encouraged to return and build what was lost. Joshua and Zerubbabel led a group of exiles back to the land to lead the building (Ezra 1-6).

In the midst of this excitement, those who returned began rebuilding their own homes first, while leaving God’s temple unfinished. While their zeal was intact, their priorities were out of order.

Main Theme and Purpose of Haggai

Simply put, the people had been blessed, but in their blessing had forgotten God. It does not make sense to us that we will actually gain from putting something else first. In our natural logic, ‘looking out for number one’ is what gets us the best result, but that is the opposite of what we read in Haggai.

Haggai explains to us that although God’s math sometimes doesn’t make sense to us, the reality is that the more we trust in God the more blessed we will become. In Haggai, we learn “the best news in the world is that God’s ultimate aim to be glorified and man’s aim to be satisfied are not at odds.” The Book of Haggai can be separated into four distinct sections:

The Failure to Complete the Temple (1:1-15)
Haggai accuses the people of not finishing the work they began, and this accusation prompts them to return to work on the Temple. This is also documented in Ezra 5:1-2.

The New Temple not as Glorious as the First (2:1-9)
The first temple was considered a wonder of the ancient world, so it is no surprise that within a few short weeks the people become discouraged that the new temple would fall short of the glory that was Solomon’s temple. Haggai encourages them that the glory of this temple will actually surpass the glory of the former temple through its key role in God’s future plans.

The Blessings of Obedience (2:10-19)
The people of Israel are making themselves impure, so whatever they build will be impure as well. Haggai reminds them that only by true confession and repentance will they find success and peace.

A Future Hope (2:20-23)
Haggai assures the people that God has not forgotten His promises to them, and he will overthrow the disobedient nations, and restore the Davidic Kingdom.

What Can We Learn from Haggai Today?

Give Careful Thought to Your Ways
Do we really give careful thought to what we do every day? Many of us live on autopilot: get up, drive to work, drive home, repeat. Yet Haggai calls us to something different. Through this short book, God calls us to a life that is filled with purpose, joy, and meaning. A repeated phrase in Haggai is “give careful thought to your ways.” This message is as relevant as it has ever been! In our modern world, it is easy to spend hours of our time engaged in things that don’t really matter.

Prioritizing the Lord’s Work
In Haggai’s day, the people had a job to do: rebuild the Lord’s house. Yet they went to work on their own homes first. God sent the message to consider their ways and compared them to the generation that had been exiled. Haggai’s message was effective, and the people resumed the work on the Temple.

Covenant Promises
God’s promises are unfailing, and he is working through all of history to fulfill them in his time. We learn in Haggai that our choices matter, our priorities matter, and that when we are faithful to God, His faithfulness to us is without question. When we place our life in Christ at the center of all else that we do, we will experience fulfillment and the blessings God promises.

Messianic Hope
The end of Haggai’s prophecy is directed to Zerubbabel, who is a descendant of David. This message is filled with Messianic hope and is filled with messianic language, such as “my servant”, and “I will make you like my signet ring, for I have chosen you.” These words spoken to a descendant of David may have given the people hope that perhaps it was Zerubbabel who was to be the promised king to reign on David’s throne. That was not to be.

However, we do read of Zerubbabel again, listed in the lineage of Christ in Matthew 1:12-13. Zerubbabel was certainly part of the promise, serving as a faithful link in the messianic chain between David and Jesus.

Our Favorite Verses from Haggai

Haggai 1:4 - “Is it a time for you yourselves to be living in your paneled houses, while this house remains a ruin?”

Haggai 1:5 - “Now this is what the Lord Almighty says: “Give careful thought to your ways.

Haggai 1:13 - Then Haggai, the Lord’s messenger, gave this message of the Lord to the people: “I am with you,” declares the Lord.