These are all of the chapters of the book of Philippians. Clicking on a chapter will show you the text of that chapter of Philippians in the Bible (New International Version). 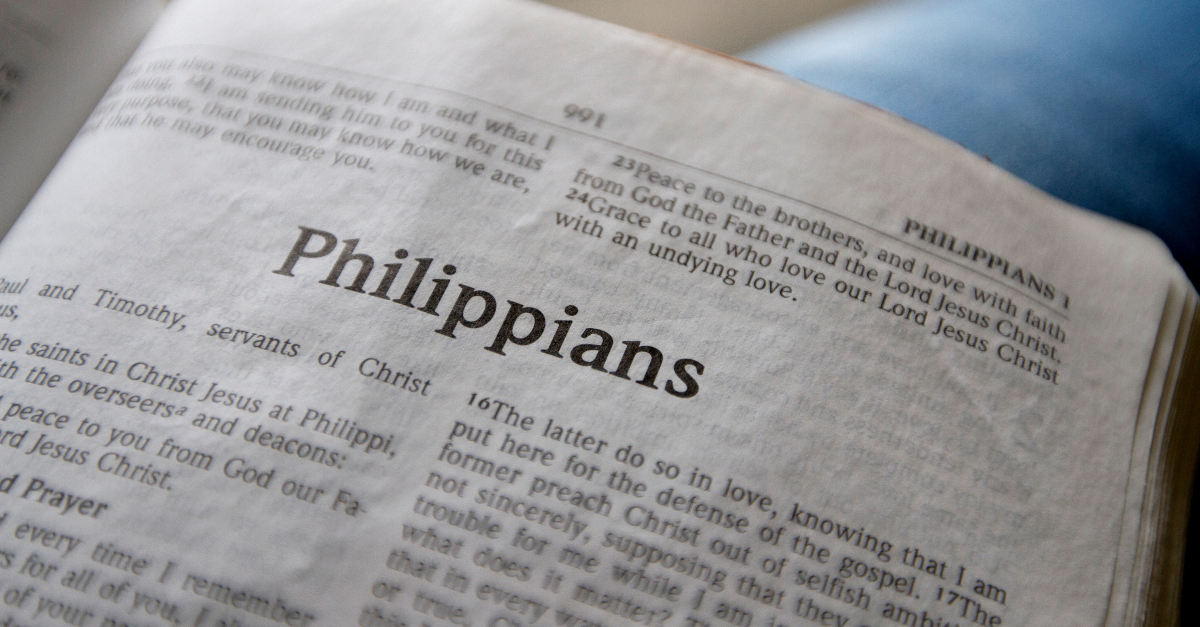 Who Wrote the Book of Philippians?

The early church unanimously agreed that the Apostle Paul wrote the Letter to the Philippians. Most scholars concur that Paul penned Philippians during his first imprisonment in Rome (A.D. 60-62).

Context and Background of Philippians

In Philippians 2:23-24 Paul points to this epistle being written toward the end of his two-year Roman imprisonment––A.D. 61, possibly at the end of Acts 28:30.”

To understand Paul’s deep love for this church, it’s important to know the backstory. The Philippian church began on Paul’s second missionary journey (Acts 16:12-40). It was the first church founded by Paul in Europe.

Philippi had a small Jewish population, with not even enough men to form a synagogue. One Sabbath, Paul went outside the city to the Gangites River where he found a group of “devout women” meeting for prayer (Acts 16:3). There Paul preached the gospel. Among them was Lydia, “the seller of purple.” Acts 16:14 says, “One who heard us was a woman named Lydia, from the city of Tyyatira, a seller of purple goods, who was a worshiper of God. The Lord opened her heart to pay attention to what was said by Paul.”

After Lydia and her household were baptized, she urged Paul and his missionary team to stay at her house. The first Philippian church likely met in her home.

Along with enjoying these new converts, Paul and Silas also experienced the trouble of a demon-possessed servant girl following them around shouting, These are the servants of the Most High God who proclaim to you the way of salvation” (Acts 16:17).

The girl’s proclamation was in no way an expression of her salvation, but it would have confused the crowds. Because she was a known fortune teller. The Jews knew that association with a sayer was contrary to God’s law (Deuteronomy 18:10).

Casting the demon out of the servant girl, in the name of Jesus Christ, was the catalyst for Paul and Silas to be beaten and imprisoned (Acts 16:18-24). It was in this imprisonment that Paul and Silas sang hymns to God and experienced an earthquake that shook their shackles free and opened the prison doors. As a result, the Philippian jailer, and his household, believed and were baptized (Acts 16:25-34).

After their release, Paul and Silas returned to the house of Lydia to encourage the brethren and before departing from the city of Philippi. But the people Paul met, and the experiences of God’s great mercy and power in Philippi left a deep impression and care upon the apostle who wrote: “My brothers whom I love and long for, my joy and crown, stand firm thus in the Lord, my beloved” (Philippians 4:1).

Main Theme and Purpose of Philippians

Purpose: One Commentary, suggests these reasons for Paul’s writing:

-To thank the Christians at Philippi for the gifts that they had sent him by Epaphroditus.

-To inform the Christians at Philippi about his own circumstances.

-To tell them that Epaphroditus had recovered from his dangerous illness. He was returning to Philippi.

-To appeal for unity and for the end of quarrels in the church.

-To warn them about false *doctrine, especially that of Jewish Christians who insisted on circumcision for Gentiles.

-To urge them to remain loyal to their faith and to stand firm against opponents.

My own observations include encouraging, equipping, and inspiring believers to press on in their pursuit of Christlikeness (3:12-14). He also encouraged them that his Rome imprisonment was actually being used by God for the furtherance of the gospel. And Paul emboldened others to speak Truth without fear (1:12-14). He reminded the Philippians that he was praying for their love for one another to abound as they continued to grow in knowledge and discernment (1:9).

What Can We Learn from Philippians Today?

There’s no room for apathy in the Christian’s life. Oh, that the Spirit would inspire us to follow Paul’s example to forget what lies behind and press on to become more like Christ.

As Paul referred to the Philippians as partners in the gospel, let this be said of us. There’s no time for quarreling amongst Christians. We must joyfully hold fast to the doctrines of our faith and press on to fulfill the ministries to which God has called us.

The answer for our troubled world lies not in politics, possessions or power. The answer is, and has always been, repentance and wholehearted devotion to knowing Christ and making Him known.

Our Favorite Verses from Philippians

“Let nothing be done through selfish ambition or conceit, but in lowliness…esteem others better than himself.” – Phil 2:3

“I count everything as loss because of the surpassing worth of knowing Christ Jesus my Lord.” – Phil. 3:8

“And my God shall supply all your need according to His riches in glory.” – Phil. 4:19

Rhonda Stoppe is the NO REGRETS WOMAN. With more than 30 years experience of helping women build no-regrets lives. I could have listened to Rhonda talk all night, is what women say about Rhonda’s enthusiastic, humorous, transparent teaching, and zeal as an evangelist.

She’s committed to fulfilling the Titus 2:4 commission by mentoring, teaching and writing books that are inspiring, grounded in Scripture and easy to read––like you're visiting with a friend over coffee.

Rhonda is the author of 6 books and appears on numerous radio programs including Focus on the Family, Family Life Today and Dr. James Dobson’s FamilyTalk, & hosts The No Regrets Hour. She’s an evangelist and speaker at women’s events, College Women’s Chapel, Pastor’s Wives Conferences, MOPs and Homeschool Conventions. Sharing the gospel at her NoRegretsWoman Conference is her sweet spot. Rhonda is a regular contributor for Crosswalk and many other magazines.

Rhonda ministers alongside her husband Steve, who for 20 years has pastored First Baptist Church of Patterson, California.  They live out their own Real Life Romance writing books and speaking at their No Regrets Marriage Conferences, but their favorite ministry is their family. They have four grown children and 10 grandchildren. To learn more about Rhonda’s speaking topics, watch her teaching and to book Rhonda for your next event visit: NoRegretsWoman.com