These are all of the chapters of the book of Philemon. Clicking on a chapter will show you the text of that chapter of Philemon in the Bible (New International Version). 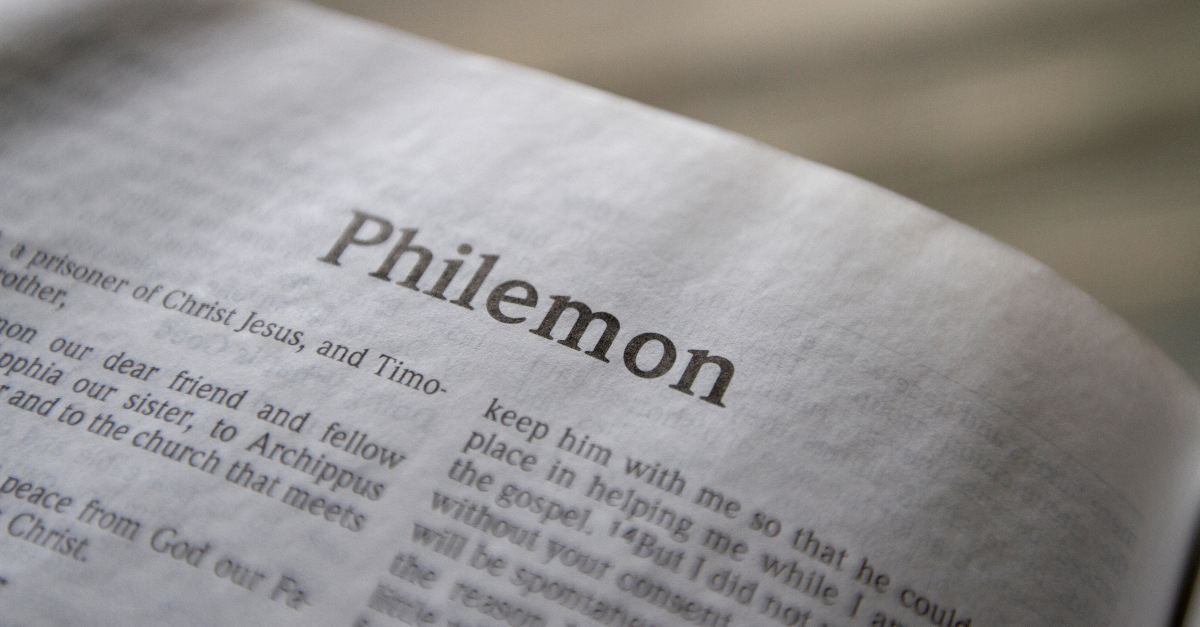 Who Wrote the Book of Philemon?

Context and Background of Philemon

Philemon was written around the same timeframe as the Letter to the Colossians, during Paul’s house imprisonment in Rome. The year was A.D. 60.

The Letter to Philemon was most likely sent with the same messengers, as the Letter of Colossians, Onesimus, and Tychicus. Paul wrote the letters while under house arrest in Rome. This particular letter concerned two brothers of the faith, both acquainted with Paul and also connected to each other. Onesimus, a slave to Philemon, ran away, and under Roman law, this was punishable by death.

Circumstantially, Onesimus converted to Christianity after listening to Paul preach and served him for a time. Paul, acquainted with the church in Colosse, which Philimon was a leader of, asked for forgiveness on Onesimus’ behalf.

The main recipient is Philemon, but there is a message for the church, as well. His position as a leader in the congregation yielded his relationships to be of public importance.

Main Theme and Purpose of Philemon

The main purposes of Paul’s letter are reconciliation, the gospel’s power to change people and society, and advocating for those who are not in a position to help themselves. Paul wrote the letter with the purpose of joining together two men, Onesimus and Philemon. Paul had the unique opportunity of allowing two brothers in Christ the opportunity to see their situation from the other’s point of view.

The apostle allowed the two brothers to come to their own conclusions but truthfully states the understandable conclusions of both sides. He proposed that Philemon should accept Onesimus, not as a slave, but a fellow brother in Christ.

What Can We Learn from Philemon Today?

From Paul’s letter to Philemon, we witness the power of great faith in God. Only He can move, grow, and change the human heart. Paul put his faith in the power of salvation, knowing Philemon’s life had been transformed by Christ to the point he hosted a church in his home, and, therefore, Paul hoped he would be open to the possibility of forgiveness and restoration with Onesimus.

Onesimus was a slave, common to this ancient time period as a way to make a living or pay off debts, and not limited to a particular race. Freedom was usually able to be earned but running away was punishable by death. Paul referred to Onesimus as “son,” and through his letter, he presented a common thread of following Christ.

“Perhaps the reason he was separated from you for a little while was that you might have him back for good,” Paul wrote in verse 15-16, “no longer as a slave, but better than a slave, as a dear brother. He is very dear to me but even dearer to you, both as a man and as a brother in the Lord.” Christ-followers know God uses everything for the good of His kingdom. Though a slave running away to find freedom was against the law, the freedom he found in Christ was of paramount importance.

Paul capped off his letter, not by telling Philemon what to do, but assuring him he trusted him to do what was right. The lesson in reconciliation we receive is one to urge us to be peacekeepers. Not in the way the world works, by taking sides and directing orders, but by compassionately trying to understand both sides. When we see each brother in Christ as a loved and cherished child of God, we see clearer with God’s perspective.

God, who sent Christ to give His life so we could be reconciled to Him, has given us the Holy Spirit. Believers can trust the indwelling Holy Spirit to move and mold hearts and minds to forgiveness and reconciliation. What we learn from the men in this letter is to yield our hearts in pursuit of Christ first, so we may see our brothers and sisters in Christ as God see them, and act accordingly, through the power of the Holy Spirit.

This teaches us to look beyond a person’s face value and choose, instead, to trust in a common bond of following Christ.

Our Favorite Verses from Philemon

Since there’s only one chapter in Philemon all of these verses come from the first and only chapter in the letter.

“I always thank my God as I remember you in my prayers, because I hear about your faith in the Lord Jesus and your love for all the saints.” - Philemon 4-5

“Your love has given me great joy and encouragement, because you, brother, have refreshed the hearts of the saints.” - Philemon 7

“Therefore, although in Christ I could be bold and order you to do what you ought to do, yet I appeal to you on the basis of love.” - Philemon 8-9

“Perhaps the reason he was separated from you for a little while was that you might have him back for good- no longer as a slave, but better than a slave, as a dear brother.” - Philemon 15-16a

“If he has done you any wrong or owes you anything, charge it to me.” - Philemon 18

“Confident of your obedience, I write you, knowing that you will do even more than I ask.” - Philemon 20