These are all of the chapters of the book of 1 Peter. Clicking on a chapter will show you the text of that chapter of 1 Peter in the Bible (New International Version). 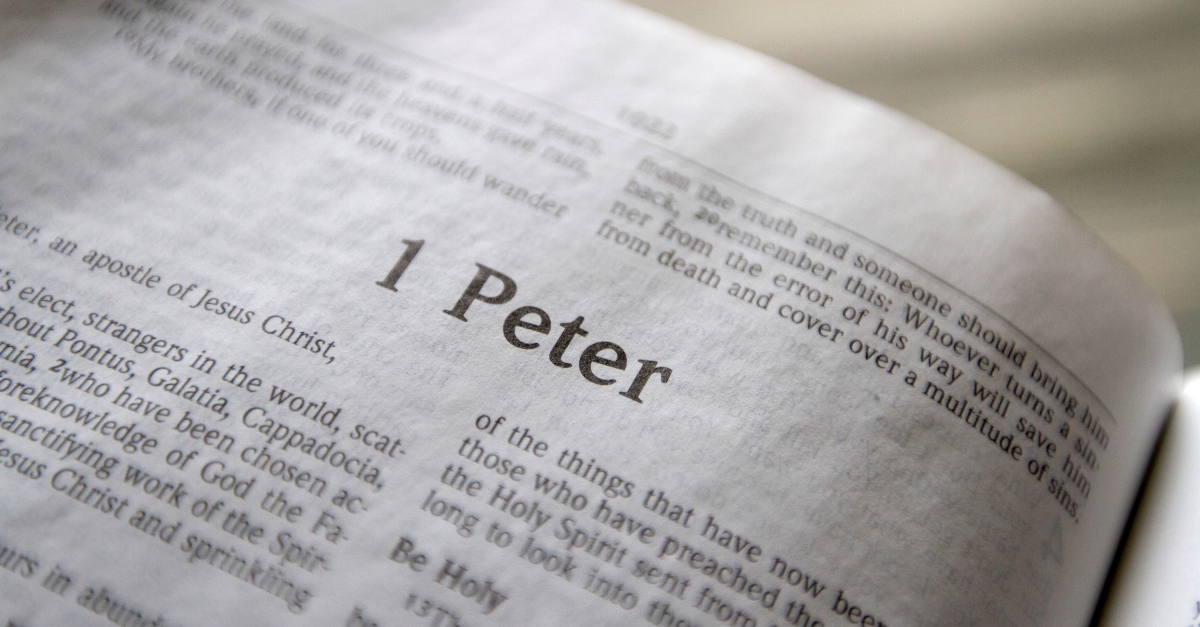 Who Wrote the Book of 1 Peter?

The letter of 1 Peter opens with an attribution of authorship to Peter, one of the original twelve disciples of Jesus Christ. Some scholars, like those in Currents in Biblical Research, believe Sylvanus, mentioned in v. 5:12, may have helped Peter construct and deliver the letter. In the Gospels, it is accounted that Peter (originally named Simon) was a fisherman. Peter’s brother, Andrew, a fisherman, was also called by Jesus to be a disciple. Jesus notably said to Peter and Andrew, “Come, follow Me, and I will make you fishers of men” (Matthew 4:19).

We know from the Gospel accounts that Peter was married, and one of the many people Jesus healed during His ministry was Peter’s mother-in-law. Peter was the disciple that denied Jesus three times following His arrest in Gethsemane, just as Jesus had predicted would happen in Matthew 26:33-35. Peter is considered to have been among the inner circle of Jesus’ disciples, witnessed the transfiguration and was the disciple who walked on water. Peter is believed to have died a martyr’s death by crucifixion in Rome.

Context and Background of 1 Peter

1 Peter was likely written sometime between the mid-60s and 70s AD, approximately 35 years after Jesus’ ministry, death, and resurrection, according to the Journal of the Evangelical Theological Society. The letter describes its recipients as the diaspora of Christ followers in Pontus, Galatia, Cappadocia, Asia, and Bithynia. The recipients of this letter were living across Asia Minor, and ranged in economic status from lower class to wealthier individuals, Currents in Biblical Research explains. At the time this letter was written, Nero was the Roman Emperor and Christians were already enduring localized incidents of persecution.

Main Theme and Purpose of 1 Peter

1 Peter mainly addresses the contrast of suffering and glory in a believer’s life. Peter’s letter acknowledged the suffering Christians were experiencing at the time, and he wrote the letter to encourage those across Asia Minor who were being persecuted. The theology of suffering is strongly present in 1 Peter. Peter did not avoid or mask or deny the existence of suffering or trials that believers faced, rather he reminded Christians to cling to their faith and put their hope in the Lord.

Peter used the journey of Christ’s death that led to His resurrection and glorification as the perfect example that suffering will lead to glory, explains the Journal for the Study of the New Testament. Peter made this comparison as a powerful reminder to Jesus’ followers to persevere in their faith because they were blessed, even while being oppressed.

What Can We Learn from 1 Peter for Today?

1 Peter is considered one of the more Christocentric writings in the new testament. Peter wrote significantly about the life and ministry of Jesus. In this letter it is written that the precious blood of Jesus has redeemed us (1 Peter 1:18-19). Jesus was the perfect and spotless lamb who was sent to save the world. Followers of Jesus are instructed to live as Jesus lived, to be holy as Jesus was holy, and to be unblemished by the world. Believers today can find hope in the fact that by the blood of Jesus, we have been redeemed and set free from the bondage of sin. We know that Jesus’ work, driven by love on the cross, has saved us, and this letter reminds us to live according to His righteousness. We are to be imitators of Jesus and serve others through compassion and humility.

1 Peter is eschatological in nature, which means it addresses the final days of humankind, when Jesus will return. Peter wrote that Christ’s incarnation, death and resurrection marked the beginning of the end of ages. No exact date or timeline is given in 1 Peter regarding when the final day will come, but the letter makes it clear that the final days have begun. We should live each day ready for Christ’s return. This is likely why Peter went out of his way to motivate believers to live pure and holy lives, so we will be ready for Jesus’ return, basking in the joy of our salvation.

As we wait for Jesus’ return, there will be trials and hardships. Suffering is a reality that we cannot avoid. First Peter encourages believers who endure challenges to stay the course of faith. He used the sufferings of Jesus as an example to all believers that our trials will eventually lead to glory when we keep the faith. The world is broken and we will experience a variety of setbacks, disappointments and grievances, but this letter helps us to keep rooted in the truth and hope that Jesus is with us, has gone through trials just like we do, and that we do not suffer in vain, but rather for the building up of our faith.

Our Favorite Verses from 1 Peter

1 Peter 1:23: Having been born again, not of corruptible seed but incorruptible, through the word of God which lives and abides forever.

1 Peter 2:9: But you are a chosen generation, a royal priesthood, a holy nation, His own special people, that you may proclaim the praises of Him who called you out of darkness into His marvelous light.

1 Peter 2:11: Beloved, I beg you as sojourners and pilgrims, abstain from fleshly lusts which war against the soul.

1 Peter 3:3-4: Do not let your adornment be merely outward — arranging the hair, wearing gold, or putting on fine apparel — rather let it be the hidden person of the heart, with the incorruptible beauty of a gentle and quiet spirit, which is very precious in the sight of God.

1 Peter 3:8-9: Finally, all of you be of one mind, having compassion for one another; love as brothers, be tenderhearted, be courteous; not returning evil for evil or reviling for reviling, but on the contrary blessing, knowing that you were called to this, that you may inherit a blessing.

1 Peter 4:8: And above all things have fervent love for one another, for “love will cover a multitude of sins.”

1 Peter 5:10: But may the God of all grace, who called us to His eternal glory by Christ Jesus, after you have suffered a while, perfect, establish, strengthen, and settle you.

Pamela Palmer is a writer, chaplain, and the founder of upheldlife.com, the platform on which she produces weekly devotionals and faith resource articles to inspire keeping faith at the center of it all. She lives and thrives on Jesus, coffee, and music. She is in pastoral ministry and gets to share in the emotional and spiritual lives of many people, being a small piece of each journey. Pamela married the perfect man for her and they have two beautiful kiddos. She has been published on herviewfromhome.com and you can follow her at upheldlife.com, or on Facebook.com/upheldlife.