These are all of the chapters of the book of 2 Peter. Clicking on a chapter will show you the text of that chapter of 2 Peter in the Bible (New International Version). 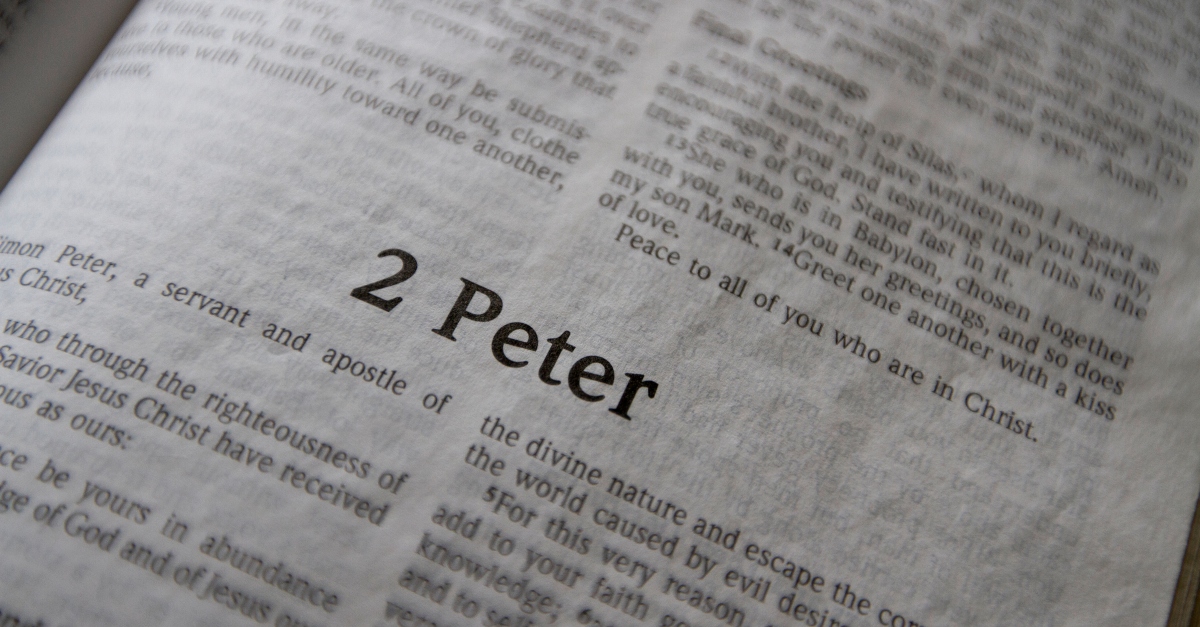 Who Wrote the Book of 2 Peter?

The book of 2 Peter was written by the Apostle Peter. Peter was the son of Jonas or John, two versions of the same name. His birth name was not Peter but rather it was Simeon or Simon. He was a fisherman of Bethsaida but at the time we discover him in the Bible, he is living in Capernaum. During much of the Gospel, we find Peter continuing to live and work in Capernaum as he pursued the trade of fishing.

Peter was brought to Christ by his brother Andrew. He was on the Jordan River with his brother Andrew, and James and John when Jesus makes his first call. Peter was a reluctant man who spent some time with Jesus and then returned to fishing. It was later when Jesus meets him again on the Sea of Galilee that Peter becomes a permanent companion of Christ.

The book of 2 Peter was written closer to the end of Peter’s life. He had already written an earlier letter, 1 Peter, to the same group of people. Since Peter died during the reign of Nero, we know that it must have occurred prior to 68 AD. This means that 2 Peter would have been written between 65 and 68 AD.

Context and Background of 2 Peter

Peter does not specify his audience in the first lines of his letter. There is a clue that Peter is writing to the same audience as his first letter in 2 Peter 3:1, “Dear friends, this is now my second letter to you.” Looking back at his first letter we learn, in the prologue, that his first letter was written to the “exiles of the Dispersion in Pontus, Galatia, Cappadocia, Asia, and Bithynia.” Most likely Peter worked in each of these five places between the time he departs from Jerusalem to his entrance to Rome.

We know from the Book of Acts that Peter worked with Jews and Gentiles. Due to the Diaspora, Jews and Gentiles were now living together. From this historical data and his words, we can surmise that 2 Peter was written to the same groups of people he addressed in his first letter.

Main Theme and Purpose of 2 Peter

Peter feels it is vital to warn the churches of new challenges coming their way. His letter is not centered on evangelizing, rather it is centered on the success of these young churches as troubles would inevitably come to them. Peter covers a number of topics, or points, in this book. He does not spend a lot of time on one or the other.

Chapter one of 2 Peter focuses on the calling and election of leaders. He wants to equip the church by teaching them how to know if someone is called. What should that person be like? Peter shares his advice on establishing a calling in verse 10, “Therefore my brothers and sisters, make every effort to conform your calling and election.” He goes on to speak about the prophecy in Scripture which lays the foundation for chapter two.

Chapter two discusses the biggest issue Peter speaks of; false teachers. He knows the world he lives in is changing. The Hellenistic Age was full of astrology and magic. Rome was declining as the post-Augustan era was waning. This came with a decline in political control as well as a decline in public morals. These churches were going to encounter false teachers, and Peter wanted them to be ready. He encourages and instructs the churches as they face this new challenge.

Chapter three is where Peter reminds the church that a day of judgement is coming. He tells them that God will keep His promise and return for His people. Peter also warns them that in the last days there will be those who do not believe. Chapter 3:3 says “Above all, you must understand that in the last days scoffers will come, scoffing and following their own evil desires.” To help the people understand, Peter reminds them of the Old Testament prophets and prophecy.

What Can We Learn from 2 Peter Today?

At no time does Peter instruct the believers of his day to rise up against their enemies. Rather, he encourages these early Christians to stay firm in their faith. This gives up the important lesson that every believer has a duty and response to form until the coming of Christ. We have to stay in the Word and keep an open line of communication with God. Without this, we are not equipped to battle the scoffers and false teachers. We will not be able to face the challenges that will arrive on the doorstep of the church.

Dissension can come to any person or congregation. To combat this, we must know God and who He is. This is our first line of defense against false teachers and heretics. Grace can only come with knowledge. Knowledge will only come as we mature in our faith.

Our Favorite Verses from 2 Peter

2 Peter 1:3, “His divine power has given us everything we need for a godly life through our knowledge of him who called us by his own glory and goodness.”

2 Peter 1:19, “We also have the prophetic message as something completely reliable, and you will do well to pay attention to it, as to a light shining in a dark place, until the day dawns and the morning star rises in your hearts.”

2 Peter 1:20, “Above all, you must understand that no prophecy of Scripture came about by the prophet's own interpretation of things.”

2 Peter 3:9, “The Lord is not slow in keeping his promise, as some understand slowness. Instead he is patient with you, not wanting anyone to perish, but everyone to come to repentance.”

2 Peter 3:10, “But the day of the Lord will come like a thief. The heavens will disappear with a roar; the elements will be destroyed by fire, and the earth and everything done in it will be laid bare.”

Popular Lectures on the Books of the New Testament: Augustus Hopkins Strong, Philadelphia: The Judson Press, 1914.

Ashley Hooker is a freelance writer who spends her time homeschooling her two children, ministering alongside her husband as he pastors a rural church in West Virginia, and writing about her faith. Currently, she is a contributing author for Journey Christian magazine. She has taken part in mission trips with the NC Baptist Men during the devastation of Hurricanes Katrina and Harvey in Mississippi and Texas. In her local church, she has served on various committees focusing in the area of evangelism along with traveling to West Virginia and Vermont to share the Gospel. Her dream is to spend her time writing and sharing the love of Christ with all she meets.