These are all of the chapters of the book of 2 John. Clicking on a chapter will show you the text of that chapter of 2 John in the Bible (New International Version). 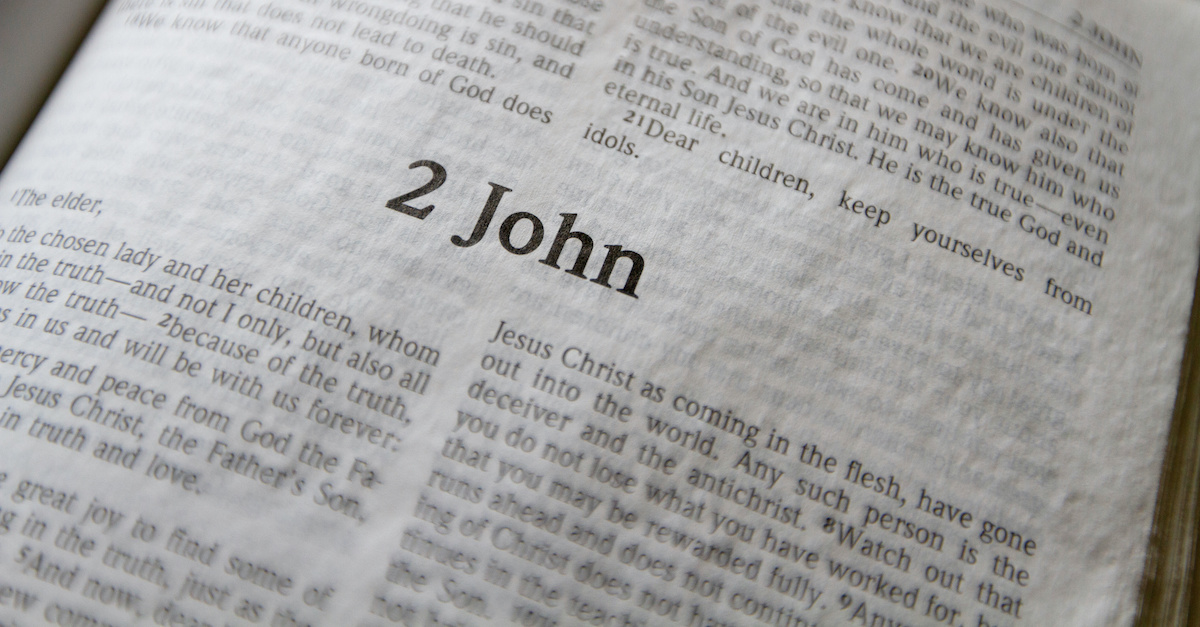 Who Wrote the Book of 2 John?

Second John is a letter written by John the Apostle to ‘the chosen lady and her children.’ The author of the letter never identifies himself specifically as ‘John,’ but only refers to himself as ‘the elder.’ In spite of this, the clear similarities to John’s other writings matched with strong tradition from early church fathers support this attribution: the second-century writers Irenaeus and Clement of Alexandria entertained no other view. An apostle using the term elder for themselves was also not unprecedented, as Peter did that very thing in his first epistle (1 Peter 5:1). Based on the evidence, we can state with certainty that the author of this short but poignant letter is John the Apostle.

Context and Background of 2 John

At thirteen verses, 2 John is the second shortest book of the Bible, with only 3 John being shorter. It is clearly a personal letter written by the Apostle John to someone who knew him well. However, there is some dispute as to whether the letter was written to a specific ‘lady’ and her actual children, or if the term is used as a metaphor for a church, with the children being members of that church. If it is a specific person, then the “children of your chosen sister” in verse 13 are literal people, and if a metaphor, then they are members of this church. There is no way to confirm one way or the other, but regardless, the intention, meaning, and applications of the letter are not affected.

Main Theme and Purpose of 2 John

The main theme of 2 John is that believers walk in truth and love one another in order to withstand the false teachers that have come into the church. It could be stated in this way, “life together in Christian love is a great protection against deception.” The early church faced many dangers, and this is given as a way to stand strong against them.

What Can We Learn from 2 John Today?

The Joy of Walking in Truth
The word “truth” is used five times in the first four verses. John speaks of those he ‘loves in truth’, those who ‘know the truth’, and living in Christ ‘for the sake of the truth’. In verse 4, John speaks of being glad to find “children walking in the truth.” Just decades after the ministry of Jesus on earth, false teachers had wandered into the church, and John spends the second half of this letter warning against them. He goes so far as to advise that these false teachers not even be welcomed as guests, saying that “anyone who welcomes him shares in his wicked work” (verse 11). There is an importance in this. Believers today must be careful to know and understand the truth of the gospel and speak out against those who would manipulate it. In a world where truth is considered subjective and based on feelings, knowing, and living out biblical truth becomes an important mark of the gospel itself.

The Joy of Walking in Love
In knowing and speaking the truth, John encourages us to do so in love. As a writer of one of the four gospels, John brings us back to the words of Jesus recorded in John 13:34, the commandment that “we have had from the beginning” (verse 5) that we should “love one another.” John goes on to state that the way we express this love for one another is to “walk in obedience to his commands”. In this way honoring the truth of the gospel and living in obedience to it becomes specifically tied to the way we love one another.

The Joy of Walking in Faith Together
Second John ends with a declaration of having many things to say but preferring to share these things “face to face” instead of writing them “with paper and ink”. The reason stated for this is so that the reader’s ‘joy be made complete.” We have no way to know if John and “the chosen lady” were ever able to meet face to face, but we do know this: there is a joy that comes in speaking to those we love and care for in-person. In a world driven by technology, mobile phones, social media, and instant communication, we often miss out on the joy of having a good old-fashioned face-to-face conversation.

Our Favorite Verses from 2 John

2 John 1:4, "It has given me great joy to find some of your children walking in the truth, just as the Father commanded us."

2 John 1:5, "And now, dear lady, I am not writing you a new command but one we have had from the beginning. I ask that we love one another."

2 John 1:8, "Watch out that you do not lose what you have worked for, but that you may be rewarded fully."

2 John 1:12, "I have much to write to you, but I do not want to use paper and ink. Instead, I hope to visit you and talk with you face to face, so that our joy may be complete."